Our friend David W. did the artwork and design for These Sins, which we are really happy with. A few favourite album/EP covers are below.

Nirvana's Incesticide EP contains artwork by Kurt Cobain which is quite disturbing and powerful for those that haven't seen it.

New Order's second album, Power, Corruption and Lies is wonderful piece of artwork as Peter Saville mixes both the romantic, classical image of "A Basket of Roses" by French artist Henri Fantin-Latour with Factory's cutting edge design of a floppy disc cut into the back inlay.

Tubeway Army's Replicas album is pretty astounding - Numan looks like a creepy, bizarre human/alien hybrid dressed up to the nines. You can't help but stare at it for a very long time. 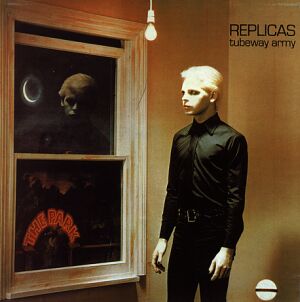 Grace Jones' Nightclubbing album is perhaps one of the most strongest, iconic images of her and demonstrates the androgynous strength and power of her music by just one initial glance.

I haven't come across that much new band artwork that I've taken an exceptional shine to however one that immediately springs to mind is the cover for Kasms' Taxidermy single.

A really original idea that no one I can think of has done. Good work!
D-Bird
Posted by An Experiment On A Bird In The Air Pump at 20:34