TOP RECORDS OF 2008 - SELFISH CUNT AND THE RAVEONETTES 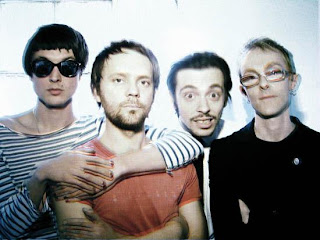 Hope you are excited about the year ahead and its potential musical talents. 2008 has been a great year for bands no doubt. However the two most outstanding acts for me have been The Raveonettes and Selfish Cunt.

The Raveonettes released Lust Lust Lust at the end of 2007 to much critical acclaim. After the explosions caused by Whip It On, Chain Gang Of Love and Pretty In Black, I had extremely high hopes for the release but was also very confident that the band would carry on delivering their beautiful treats to their fans, which of course they did. However being true, constant, creative musicians and despite a hectic tour schedule and somehow making time for an exciting new solo project (Sune Wagner), the band still continue to treat their fans with utmost respect - something that keeps this band so humble and rare compared to most contemporary bands - and released 4 downloadable EPs in 2008: Sometimes They Drop By, The Beauty Dies, The Raveonettes Remixed and Wishing You A Rave Christmas. Being a devoted fan of the band's, this was a dream come true.

For those that haven't yet downloaded it, please visit http://www.myspace.com/theraveonettes and listen to the best music of 2008. You really won't be disappointed. Here's the video for Black/White which is on the Beauty Dies EP:

Now back to UK soil and the most outstanding live act of our generation released their greatly anticipated English Chamber Music album this year. Yes, that band being the one and only Selfish Cunt. Despite a tragic year, this band did what only true, genuine artists can find the faith to do - turn negative, life-changing experiences into explosive, raw, beautiful art. Catch the boys in London on January 22nd at Hoxton Bar & Kitchen with Ulterior, Electricity In Our Homes and us in support. Do buy this album, sit back and dwell on why we must remember that Britain is shit. It's because the politicians don't care and we don't care about politics. At least one small collective of musicians do, and are not afraid to remind us of it. And for that reason my dear friends, this album needs to be sitting in your record collection. http://www.myspace.com/ixnewyork

Here's the amazing video for England Made Me directed by our close friend and Lights Out video director, 241-24-7: